The “Smart City” label has become the aspirational future target of many urban centres, and we’ve developed a foundational data management and visualization system that can help them to plan at a lower cost compared to other systems. We call it the Classified 3D Reality Mesh, and we’re already using them to help cities to prepare for their smarter future.

3D city models can be produced using multiple 3D capture methods. The most common technique uses LiDAR (light detection and ranging) data as well as ground and/or aerial imagery and extracting 3D buildings to the CityGML standard. The increase in computing power and 3D format support by all the major geospatial software solution providers is encouraging innovative cities to adopt a 3D reality mesh city model as their base dataset.

We start with a high-resolution capture of an urban area. We use a mixture of aerial and ground imagery with oblique photogrammetry as the basis of a realistic 3D mesh model. We’ve already completed aerial captures at a quality of 2cm per pixel as a benchmark of our current working capacity. Those aerial and ground captures get turned into the 3D mesh without the need for additional measurement systems like LiDAR.

The next step is “classifying” the data. A limiting factor for mesh modeling in the past has been the lack of context to the images; objects in the 3D reality mesh models need to carry attribute data to maximize utility for city planners and managers. We use a mixture of manual and AI-driven processes to classify objects as buildings, trees, and others. Each classified object can then have databased information applied to it. Interactive 3D GIS solutions like Skyline’s TerraExplorer or Cesium then allow users to interact with and query the integrated classified 3D data.

An accurate Digital Terrain Model (DTM) is also generated from the capture for the vector data of the classified objects to sit on top of. Contours can be overlayed at 30 cm intervals to show subtle changes in the elevation and texture in the terrain. DTM’s are useful for modelling drainage or water management.

City planners have a powerful visualization and data management tool with the 3D classified reality mesh. They can start with a high-resolution aerial 3D mesh model of the captured area, then zoom down to an individual classified object and isolate it to see any database information. Users can hide all other buildings or vegetation to see the isolated object alone in high-res 3D.

Their 3D Reality mesh can be updated with future captures and database information to build a valuable data set. The 3D Reality Mesh Model gets more valuable over time as more relevant data is added to it, and the imagery from previous captures becomes a visual archive of an area for future reference. 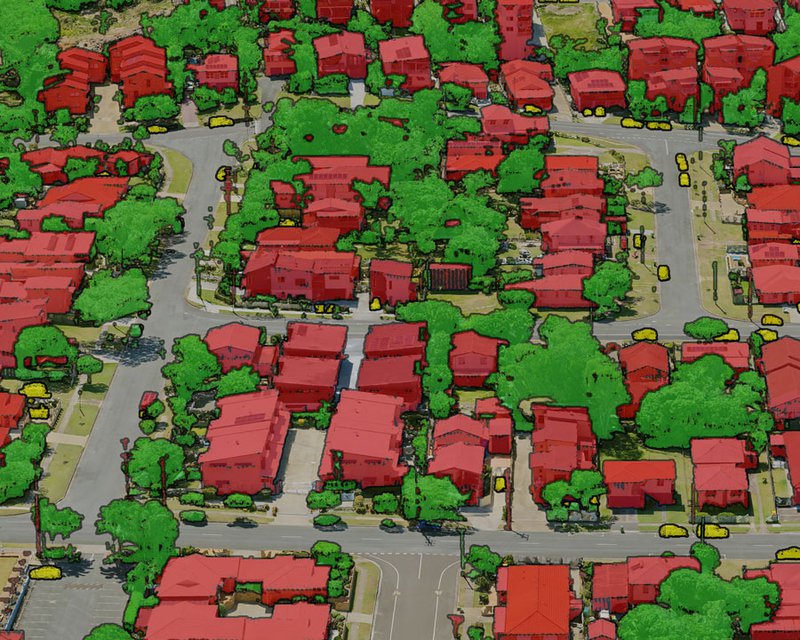 Take the humble streetlight as an example. The physical attributes, geographic frequency, and ubiquity of streetlights in urban areas will see them become powerful smart city infrastructure. It won’t be long before streetlights have built-in hardware like 5G base stations, weather and atmospheric sensors, security cameras, traffic monitoring abilities, and are entirely self-powered by solar panels. With those features comes increased data management, which is where a classified 3D cloud mesh can help by storing all of that attribute data.

Those are just some of the features that could be relevant for a single streetlight. The applications for housing the data of entire buildings are substantial.

SEE IT IN ACTION

Our Australian team made a classified 3D reality mesh of the City of Unley in South Australia. Users can interact and query the integrated classified 3D data through 3D GIS solution, Skyline TerraExplorer Pro. It’s a showcase of the final product and what value it brings. The team used a mixture of standard 7cm resolution and high resolution 2cm for the more critical locations like the retail and café strip.

The video shows how the classified 3D reality mesh lets you move through space, isolate features, and interact with data sets applied to them.

We invested in photogrammetric 3D Cloud Mesh to give a high-quality alternative to our LiDAR capture service, which didn’t suit all projects.

We’ve used LiDAR extensively in urban areas, but some cities, or private companies, don’t deem it viable for their needs. LiDAR has an extraordinary capability to measure 3D spaces, but it doesn’t always fit into everyone’s project requirements, and 3D imagery is more suitable.

Some territories have captured with both LiDAR and photogrammetry. Helsinki has been heavily investing in both capture systems, and you can see their 3D mesh in a browser-based app. Our service will differ in the final product from the Helsinki model because we used ground-level photos in addition to aerial capture.

Both LiDAR and 3D reality mesh are different tools for different jobs, and we can do both if needed. They’re most valuable when used together, but individually will suit different jobs.

TALK TO US ABOUT CLASSIFIED 3D REALITY MESH MODELS